The main conference is a whole day of keynotes, workshops and panel discussions focussed on the business of this genre that is making its way into mainstream T&T music via a number of remixes of popular soca by Machel, Bunji, Fay-Ann and others, as well as modern productions that have transformed the music of Shorty and Pelham Goddard’s generation to a sound moving tens of thousands of bodies here and abroad and making household names of DJs/remixers and producers like Major Lazer, Jus Now, Detnator, Kubiyashi, Im4rio and Ultimate Rejects, to name a few.

Akil Burgen of Kidult Entertainment, part of the supporting team for the conference, gave the main address focussing on the role and fit this music has in the multi-genre space of T&T’s music industry. He noted that the almost two decade old global electronic dance music industry is worth $6.2 billion in 2014. [The same source, the International Music Summit, in its 2015 Annual Report estimated the industry has grown year-on-year 12% to $6.9 billion.] The organisers are positioning CDMC to become the Caribbean regional hub for the global EDM industry.

With the theme of “Breakthrough” in this inaugural year, the journey to position this genre more into the mainstream revenue generators locally will be developed by specific objectives of the conference. These range from identifying and developing local talent and content for export into foreign markets to discussing key elements about the legal and commercial structures of the music industry especially focused on the use of online technology. Additionally, exposing industry suppliers and promoters to the latest technologies and equipment required to pioneer the industry was cited by Burgen as pivotal to the kind of synergy necessary in the industry for expansion.

Master of ceremonies and Conference Advisor, Josanne Leonard noted the role of CreativeTT and its subsidiary, MusicTT, in re-prioritising the local music industry as a economic growth area, and challenged that organisation, represented that night by CreativeTT communications manager Kris Granger, to see the value of partnering with this group of young entrepreneurs in a kind of public-private partnership that is independently doing the kinds of things that were touted by CreativeTT as among its raison d’être. It should be noted that Minister of Trade, Vasant Bharath at the formation of CreatriveTT said that what his government was, “trying to do is strengthen it [the creative industries including music] by putting some commercial sense and commercial acumen into developing the sector with people who have succeeded in those areas.” The clear example of the alliance of state and private enterprises was offered at this launch. 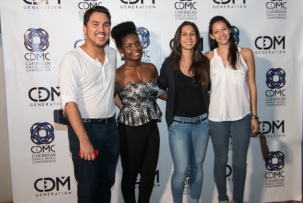 Event Coordinator, Michelle Hart along with Leonard add a deep wealth of practical organisational experience to a group of dance music event promoters now stepping out of the crease of the party to the business of the party. The supporting events would highlight local and regional DJs playing to a buying public with the intent of increasing awareness through social media support and networking with international DJs. CDM represents an opportunity to tap into a seemingly “wall-less” global dance scene that is more crossover-friendly in it appeal than major genres like R&B and hip-hop. Major local artists have used top international producers/remixers like Afrojack (Machel Montano feat. Chaka Khan, “So On Fire”), Major Lazer (Bunji Garlin, “Differntology”), Richie Beretta (Fay-Ann Lyons, “Catch Me”), Jamtech Foundation (KMC, “Forever”) to create foreign market-ready material with varying success. The idea and possibility of developing local talent to return the favour to international talent is a goal of CDM Generation’s first step in the evolving T&T music industry. For more information, go to http://bit.ly/CDMConference