Government state enterprise, MusicTT over the last 2 weeks has been criss-crossing T&T—POS, Arima, San Fernando and Tobago—to participate in stakeholder engagement meetings to listen to artistes/musicians, producers, promoters and other interested parties on what they are looking for in a T&T music industry of the future. This plan of action coincides with the recently revamped request for proposals for the development a Strategic Plan for the Music Industry, as managed by MusicTT, to guide the sector earmarked to diversify the economy away from oil and gas. The Music Industry is a sub-sector of the Creative Industries which the present Government of Trinidad and Tobago has chosen for development toward the diversification thrust.

As a subsidiary of CreativeTT, MusicTT encompasses the larger mandate which is “to stimulate and facilitate the business development and export activities of the Creative Industries in Trinidad and Tobago to generate national wealth,” but focuses on accomplishing this specifically within the music sub-sector. MusicTT therefore exists “to strengthen the capacity of the local music industry in T&T as well as to explore avenues for business and trade by a commercially-viable music sub-sector.” Former Trade Minister Vasant Bharath (above) noted that “CreativeTT was born out of Government’s firm belief that the creative sector has the capacity to become one of the most important sectors of the economy in terms of investment, revenue, trade and employment generation.”

Despite the perceived hubris of the minister in his insistence that this model would catalyse an expansion of the existing industry towards a global economic standard—Cabinet approved its formation before October 2012, a board was selected by September 2013 only to be fired in less than one year with no publishable positive results and a return to the stakeholder consultation phase—stakeholder apathy and doubt on the success of the state intervention over the last two years of the existence of CreativeTT remains, as much as the apprehension by many during the initial consultations at the company’s formation stage back in the last months of 2012. (MusicTT was not formalised with a board until November 2014.) Today stakeholders complain publicly, directly during the engagement exercises and on social media afterwards, that their needs are not being met by government intervention.

A critical look and listen at comments by stakeholders, however, reveal a fissure between what MusicTT offers and what stakeholders believe it should offer. In addition to the jargon-heavy mandate outlined above, MusicTT and by extension CreativeTT have functions that were outlined in documents presented to stakeholders that plainly outline specific roles and goals for the subsidiary companies. In addition to providing technical and sector specific advice to the CreativeTT board, MusicTT is supposed to identify creative capital (talent), to develop the creative product to compete internationally (build capacity), and administer an incentive programme (fund projects), among a dozen identified functions. What stakeholders want is different.

A number of locally-focussed issues were presented to the panel at the MusicTT consultations including lack of performing spaces, issues of professionalism, standards of product quality. At the Port of Spain consultation, Brother Resistance noted the diminishing number of performing spaces, while Ozzy Merrique spoke on the desire for “state funding between gigs” to supplement income. 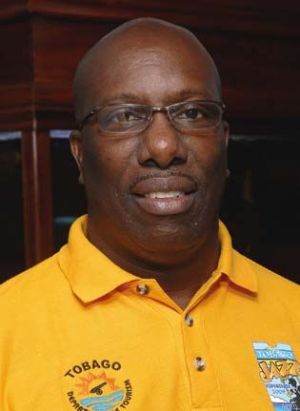 There was also general frustration about the lack of funding to make a difference for individual projects – it was revealed in the Arima consultation that the budget for the current quarter for project funding is $300,000 for all stakeholder submitted projects! MusicTT chairman John Arnold (right) noted that the organisation is working towards building capacity in both quality and quantity to a level that satisfies the evolving global music marketplace.

In general, stakeholders would like government to provide an enabling environment for the creation and fair distribution of their creative content. That includes

According to the outline provided to stakeholders by the Ministry of Trade at the beginning of stakeholder consultations, the MusicTT can advise the CreativeTT board on the appropriate incentives for the music industry, but it does not have any implementation functions to directly make a difference.

COTT via its CEO Josh Rudder (right) spoke of growing the music publishing segment of the industry to redirect revenues away from royalties from broadcast media towards licensing and placement of content in new areas like television, video games, branded marketing. Despite this approach, which is becoming the norm in global markets, one hears local complaints about not hearing one’s music on the radio. The impact of radio plays on increased demand for a song ignores the suggestion by Rudder that royalty payments for a song for a year are dwarfed by the lucrative deals in play with song placement. The economic divide between radio airplay and song placement becomes clearer with elucidation of the history of the struggle to even get a song on the air in a fair and equitable way.

Rubadiri Victor (right) of the activist NGO, Artists’ Coalition of T&T (ACTT) along with other stakeholders of the dormant Recording Industry Association of T&T (RIATT) and others, for over a decade, have been championing the legislative implementation of a 50% local content quota for broadcast media. Broadcast policy is implemented by Cabinet while the Broadcast Code is facilitated by the Telecommunications Authority of T&T (TATT). In 2003, the existing broadcast policy spoke of the then government’s unwillingness to legislate quotas but to “enter into dialogue with the Broadcasting Industry to decide on a voluntarily imposed quota for local content on the television and radio stations of the country.” The statement continues: “The Government proposes to provide very significant exposure and development for local culture through the development of a Public Broadcasting Service.” CNMG was created but there are no increased quotas for local content on the stations therein. The Broadcast Code, which  and is still in final draft mode since 2014 makes no mention of local creative content nor quotas. Nor payola! The link between payola and airplay was whispered, but never definitively discussed.

Stakeholder engagements, or “talk shops” as they are cynically called, are a way for government to gauge feedback. The problem, as defined by some stakeholders is that there have been too many talk shops holding out the promise that individual offerings would be heard, and hopefully, accepted and implemented. Stakeholder apathy and disgust may reflect an unwillingness to acknowledge the role of wider consultation and the critical analysis of any suggestion before uptake at official level. The sense of entitlement that can be read between the lines of the long discursive engagements criticizing the process may actually be a desire to be heard and acknowledged.

An ECLAC study of creative industries in the Caribbean from 2012 noted, that “a major shortcoming of the Caribbean music sub-sector is that upstream creation has not generally been matched by a strong downstream network of music training, publishing, digital delivery, marketing and linkages with film, fashion and other sectors. As a result, the potential to increase value added in the sub-sector has been under-exploited.” Lamar “Beebo” Pollard, recent graduate from UTT Academy of Performing Arts concurs by saying, “figure out how to integrate, carnival (the festival), steel pan, the other musics, ICT, fashion, and film (including animation), into a coherent ecosystem. None of those industries, except ICT, will thrive (creatively or financially) without proper, fluid interaction with the others.”

While local stakeholders are talking about building a viable local industry, MusicTT is talking about an exportable one. To get the state and the stakeholders on the same page is a goal that is still being worked out in the coming weeks as the population awaits to see if the government continues on its path, or if a new government eschews the re-branded state enterprise for a new version. After TIDCO, EIDECO, TT Ent and CreativeTT, the adage “doing the same thing over and over and expecting a different result” takes on a relevance that should not be ignored if the goal of diversification is to become real with the creative industries.

One thought on “The Music Industry in T&T: Part II – What music workers really want¹”