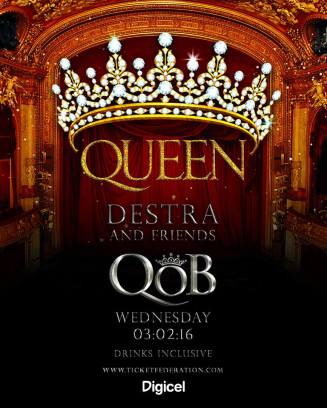 Destra Garcia launched the second edition of her concert QOB Wednesday, this year entitled Queen, at a news conference at the Digicel box at the Queen’s Park Oval. The event will take place on the Wednesday before Carnival, February, 3 at O2 Park in Chaguaramas, and include a number of female “Queens” as special guests to the self-proclaimed Queen of Bacchanal. “Caribbean Queen, Alison Hinds; Queen of Chutney, Drupatee Ramgoonai; Queen of Sass, Nadia Batson; Queen of ‘Winery’, Denise Belfon and Queen of Dancehall, Tanya Stephens,” were named as guests with the promise of more guests, including some men, to be revealed in the coming days.

Working with Garcia in this year’s production is Jules Sobion of Caesar’s Army event management team, who brings the needed experience and expertise to a production that Garcia admitted she burdened herself with last year: “It is difficult for me to trust anybody. I was singer, promoter, producer, everything. It was a lot. Jules and the Caesar’s Army team would allow me this year to focus on what I need to do,” she told the T&T Guardian. Sobion re-iterated that events such as Queen act as catalysts for Caribbean integration. Garcia has proven to be a Caribbean star with large eager fan bases up the islands flocking to her performances there, and inclusion of Caribbean artists on the cast seems to prove Sobion’s point.

The event is organised as a “drinks inclusive” event with “fine wines and special cocktails for ladies”—bellinis and mimosas—and for the guys, “rums of all kinds.” A six-hour extravaganza, from 8:00 pm to 2:00 am the following morning, Sobion promised entertainment from start to finish.

Digicel’s Senior Sponsorship Officer, Christopher Edmond, speaking on behalf of his company, as title sponsor, at the launch noted that the telecommunications company has invested $10 million over the past decade in T&T culture, Carnival and music, including having Garcia as a compensated brand ambassador from the inception of the company’s presence in this country. The continuation of the partnership coincides with the company’s drive for inclusion and recent initiatives for special needs persons, “Just Like You” suggesting that Garcia role with the company was bigger than soca.

Garcia’s role as a female pioneer and trailblazer in the highly competitive arena of soca was a topic for an extended conversation with the singer. When asked about her role as a mentor to younger female soca singers, she admitted that she is available, and did mentor a couple artists who are still on the scene, but notes that the soca scene, like a lot of the music scene in the islands, is notably male chauvinistic. “It’s difficult being a female in this business.”

She admitted to human frailties: nerves and stress before competitions, disappointment and fleeting anger at the lack of significant accolades here—she was awarded the Best International Act (Caribbean) at the Black Canadian Awards and was the first soca artist at the Pride Toronto 2015 Festival—despite winning a number of back-to-back COTT Awards. The lack of a Soca Monarch or a road march title was a topic she smilingly refrained from answering when offered a chance to respond to suggestions of blacklisting and the reputed “soca mafia.”

“That [the reputed emotional failings] has all changed since I had my daughter,” was the remark that signalled a growing maturity of the singer who began her professional career in 1999, and like her colleague and sometimes duetting partner, Machel Montano, is aware of the need for re-branding. Tossing around the jargon phrases of branding and marketing, Garcia places this concert in that context as she segues her career path away from the bitter battleground of a Soca Monarch competition towards the strengthening of her annual concert event, much like Montano and fellow Digicel brand ambassador, Kes, have done.

There is a notable demise in recent years in the number of fêtes featuring Garcia as a headliner, and she admitted to purposely planing this strategy this year while again re-iterating her popularity up the islands and in the international diasporic communities, and the importance of cementing the QOB Wednesday brand as a must-go event for Carnival. The economic downturn according to her, “will affect everybody.” “In the last week before Carnival, Queen will cater for the returning visitors who normally arrive at that time, and are unaware of the other fetes. This event is about tourism and I am playing my part.”

Destra Garcia has a number of new songs for the season including a new one with fellow Queen, Drupatee Ramgoonai, and another soon to be released with Tanya Stephens, and her promise is that all those and her vast and growing catalogue of hits will be performed at QOB Wednesday.

One thought on “Destra launches her concert, QUEEN, to media¹”