Last Sunday, an almost packed Queen’s Hall audience witnessed an evening of entertainment that showcased three of the islands most popular, and increasingly most accomplished singers, Raymond Edwards, Eddie Cumberbatch, and Nigel Floyd, in a concert dedicated to memories and feelings inspired by the popular music of the last 40 years: “Down Memory Lane – the soundtrack to your life!” Collectively known ad Q.E.D. TT, this trio melded vocal prowess with easy entertainment acumen to deliver an evening of surprises and fun with an audience that got it. They also launched their new live CD that night. 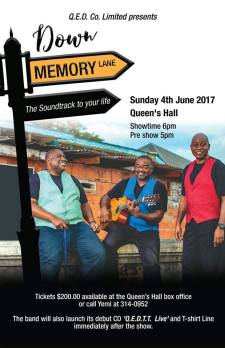 It is said that the whole is greater than the sum of its parts, and this was evident that evening. On a perfect night, three out of three singers would be vocally on the mark —hey, two out of three ain’t bad — and the music cues would not be missed by apparent unpreparedness. This was not a perfect night for execution, but was a reflection of high entertainment value that this group is known for. This was popular music as transformational art. This was a Sunday matinee for the ages.

After individual introductions with songs best suited for their styles, fabulously accompanied by Johanna Chuckaree-Lohmeyer on keyboards, the guys delved into the songbooks of the 1970s to the present covering a range of genres focusing on song themes of love and heartbreak, of joy and gay abandon, of fun. With a production motif that spoke of four “lanes” — Tittyvay Way, Hornerman Alley, Tabanca Lane and Mamaguy Road — meeting at the crossroads of Junction Q, an allegorical focal point for memories and experiences, the audience was taken on a trip for more than 90 minutes that showcased a side of the local music industry that packs in the audiences despite the diminished profile from popular media.

Raymond Edwards is one of the finest male voices in these islands whose range convincingly handled without incongruity Broadway, gospel, opera, pop, R&B and even a little Buju Banton! A medley of reggae songs with operatic tenor Cumberbatch singing Marley’s “Redemption Song” and Edwards convincingly tackling Buju’s “Untold Stories”, signalled that there was not a genre the big man can not handle. The sight of him dancing to EWF’s “September” brought out cheers from the audience who were all aware of his recent health issues. There was no stopping his energy.

The irony of transforming a song of same-sex desire — Rihanna’s “Te Amo” — into a number for a lithe dancer, Jodie Akal, to cavort with the serenading trio could signal that the singers missed the point of the song, but the effect of a co-mingling of voices trained for the highs of Broadway’s Jekyll & Hyde (“This is The Moment” sung by Floyd) and opera’s Turandot (Puccini’s “Nessun dorma” sung by Cumberbatch) with the well-known melodies made for superficial joy, was a treat that reinforced the idea that superior talent always trumps populist ideas of entertainment irrespective of genre.

Sometimes, a song can be tamed, sometimes a song can be re-made anew. Calypso and reggae hits, pop and R&B ballads were all given new meaning and depth by the sensitivity of the trio’s expressive voices. This should be the standard for male singing entertainment in these islands. Q.E.D. is bringing balance back to the scene here. The initials Q.E.D. stands for Quite Exquisitely Done, and the overall performance last Sunday was just that.